Living in the Moment

May 30, 2019
I type this up as I am just coming to the realization that it has been over a year since my last post. I can't believe it has been that long! This post was intended to be about how we always look to something in the future, never the moment right in front of us. But as it hits me how much time has really gone by since I last wrote something up here and what has transpired, I find myself looking back, not forward, and still, not necessarily at the present moment.

For the longest time, I thought that something was wrong with me because I couldn't ever focus on the here and now. But, in talking with other people, it has been revealed that, while there are indeed things wrong with me, the fact that I fail to "live in the present" is not at all unique to me.

So, why do so many of us fail to really live in the moment? Perhaps you've heard of the term "mindfulness." Essentially it is about being in a full state of awareness. So, as the name would suggest, it is having your mind in the here and now. It's not meditation, because as I understand it, meditation is more removing all thoughts, while mindfulness is more-or-less the opposite. You allow thoughts to enter your brain. And you do so in a way that is not judgmental or prejudice. You just realize that you have that thought and it's ok, but then your bring your mind back around to the present.

Back to my question - why do so many of us fail to live in the moment? We are always waiting for something - graduation, marriage, promotion, new job, new girlfriend or boyfriend, divorce, or, that new thing we just ordered online that we really don't need, and in my case that I probably can't afford either.... We even know that it's unhealthy to wait for the next thing because it makes us uncomfortable. Do you think Jeff Bezos would be the richest man in the world now if it wasn't simply for the fact that you could buy damn near anything and have it in 2 days? Not only do we always look forward to the next thing with great anticipation, but we hate the actual waiting. As soon as we one thing comes along, we are looking for the next.

How often do we just sit and think how great things are right now? It's always an after thought. To quote the American version of the sitcom, The Office, "I wish there was a way to know you're in the good old days before you've actually left them." While said to be comical, being as the show is, in fact, a "Situational Comedy," there is actually a lot of truth in that. We are always looking back and the good old days. Or, we always think how great it will be when we get that new car. Or when we make more money. Or when my ex gets her comeuppance. And when we are down in the dumps, we think it's as worse as it could ever be. Then, something happens and you realize that is the new worse thing ever. 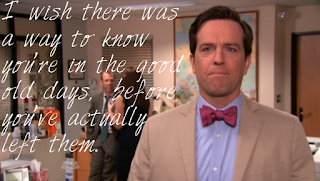 Remember back in high school when you couldn't wait to get out and see the world? I look back and realize how great I actually had it in high school. I loved my friends, loved being able to take the Jeep or the four-wheelers out and just have fun. But I didn't truly appreciate living in a small town. Now I live in what would be considered a large city in comparison but it still relatively small compared to many large cities. For example, I lived in Kyiv for nearly 2 years and that city alone has more people than the entire state of Utah. And we have lots of cities like that right here. But now I realize what my parents realized, which is how great it is to live in a small town where you know everyone. While Cheers was about a bar in Boston (a city of roughly 700,000 people), small towns are really where everybody knows your name. As I deal with the traffic and congestion everywhere and I don't know my next door neighbor from Adam, I often think I wanna go where everybody knows my name.

Now, look back at the "good old days" and wonder why they went away. At what point will I start to think back to 2019 as the good old days? Or will I? Did I peak in high school? I sure hope not because if that was my peak, what does that say about my overweight, out of shape self now?

So, to allow myself to live in the moment I eat whatever I want, don't exercise, drink an ungodly amount of caffeinated soda and think, meh... that's a problem for future Tyson... I sure don't envy that guy!

Popular posts from this blog

Chronic illness and the loneliness it creates

October 15, 2017
This post is one that I have felt needed to be written for a long time. But I have avoided writing it for a number of reasons. I won't go into the why nots, but I will go into the reasons I feel like it needed to be written. To start the "whys," I will explain why I write a blog. There are 2 main reasons I blog, the first is rather selfish - it is therapeutic to me. I can't explain how or why, but it is. The second reason is really 2 fold - 1) it may help others by reading it 2) it may help others to help me. This will likely be a longer post that usual. You've been warned.

It may seem to odd to people that someone who is has been happily married for almost 10 years and has a child could ever feel lonely. Perhaps someone reading this is currently or has gone through a similar situation where they have a chronically, seriously ill spouse. If you are or have been in that situation and never felt lonely, I commend you and ask for your secret. If you are someone who…
3 comments
Read more

November 16, 2017
First, I'd like to thank everyone who has added to my discussion on Facebook regarding feeling homesick while one is already "at home." While I didn't get responses from as many people as I was hoping and expecting, the quality of the responses I got was astounding. And I'll take quality over quantity.

This is something I've been thinking a lot about for the past few weeks since I first read someone asking if it is possible to feel homesick when one is at home. This question has really stuck with me, especially because it kind of put to words what I have been feeling for quite a while. We bought our current house in November 2009. So, one would think that after having been here for almost 8 years to the day, I'd feel at home. I don't. I wouldn't say I've never felt at home at all here, and I'm not sure if this feeling has just come up as of late since life as I knew it (and marriage and family life as I knew it) is now gone. Perhaps I hav…
3 comments
Read more

The Realism of Depression

December 29, 2013
Sometimes in life, when we fail to understand something, we fail to "believe" it is real. Take for example depression. I have suffered with chronic depression since high school, and unfortunately, after the drama of high school is over, the depression doesn't necessarily get any better.

When I would have down times, and even now sometimes when I do, people would tell me to just look at everything I have to be happy for and quit focusing on the negative. But, unfortunately, it isn't that simple. That's like telling someone who is sick with a cold to just quit focusing on the illness and be happy and healthy. People who would often have the best of intentions would say things like "it's all in your head." Well, that may or may not be true, but either way that wouldn't make it any less real or less painful. Mental illness is just as real and can be just as hard to deal with and physical illness. Sometimes it's hard to recognize something you c…
2 comments
Read more